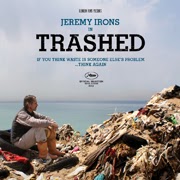 "Pulitzer price winning author Russell Baker once said "The American dream is to turn goods into trash as fast as possible."  Nowhere is this better illustrated than in Bill Kirkos' film Trashed.


“Trashed” is a provocative investigation of one of the fastest growing industries in North America. The garbage business.

The film examines a fundamental element of modern American culture…the disposal of what our society defines as “waste.”

It is an issue influenced by every American, most of whom never consider the consequences. Nor, it seems, the implications to our biosphere. At times humorous, but deeply poignant, “Trashed” examines the American waste stream fast approaching a half billion tons annually.


What are the effects all this waste will have on already strained natural resources? Why is so much of it produced? While every American creates almost 5 pounds of it every day, who is affected most? And who wants America to make more?


The film analyzes the causes and effects of the seemingly innocuous act of “taking out the garbage” while showcasing the individuals, activists,corporate and advocacy groups working to affect change and reform the current model. “Trashed” is an informative and thought-provoking film everyone interested in the future of sustainability should see.   HERE >>