Who Really Benefits from the Keystone Pipeline project?

Though President Obama has not made a final decision on whether he will green light the controversial Keystone XL Pipeline, it will no doubt create a firestorm, especially with the environmentalists, if he does.

During a recent survey, when asked about the Keystone Pipline project, most people didn't know much about it except that it will generate a lot of jobs and reduce US reliance on Mideast and Venezuelan imports.  They knew less about the kind of crude oil it would transport, or the environmental consequences, and none realized it was a mining procedure and not conventionally drilled.  And proponents want to keep it that way. The dumbing down process at its best.

Back in 2010, in our November edition, and before it became politically newsworthy, we published an article, "The Dirtiest Pit on the Planet." It discribed the Alberta tar sands oil field as one giant nightmare. This is the oil the Keystone Pipeline will be transporting.

The project will affect every living being, human or non-human on the planet. The carbon footprint is enormous, possibly bigger than anything we've seen before. It releases at least three times the CO2 emissions as regular oil production procedures and will likely become North America's single largest industrial contributor to climate change.
The Keystone XL project would expand an existing pipeline from the huge tar sands of Alberta to refineries in the US Midwest, nearly doubling the initial capacity and transporting crude oil deeper into America to refineries on the Gulf coast of Texas. Its proposed route would stretch about 1,660 miles, connecting Hardisty, Alberta to Port Arthur, Texas. It was first proposed in 2008.

The southern leg of the pipeline, from Cushing, Oklahoma to the Gulf Coast, was completed last year, and began shipping oil on 21 January.  And so far it's had 14 accidents in its first year of operation.

Does the US economy really need all that oil?

No. America is in the midst of an oil and gas boom, and on track to becoming an energy superpower. Most of the tar sands oil would eventually be exported, though there are plans to develop new markets for tar sands crude in the north-east. If half amount of money and technology was put into clean energy as in the fossil fuels we could be weaned off oil completely as an energy source by 2050.

So, Who Really Benefits from the Keystone and Tar Sands oil?

You don't have to look very far to see the usual suspects. Big oil naturally is at the top of the list and they can't dig fast enough, followed closely by many of our elected representatives, Republicans and Democrates, handing them the shovels.

However, if you want to know the real beneficiaries, you might start with the Koch brothers. They are positioned to be the big winners if the Keystone XL Pipeline is approved. The two brothers together own virtually all of Koch Industries Inc. — a giant oil conglomerate headquartered in Wichita, Kan., with annual revenues estimated to be $100 billion.

A Solve Climate News analysis, based on publicly available records, shows that Koch Industries is already responsible for close to 25 percent of the oil sands crude that is imported into the United States, and is well-positioned to benefit from increasing Canadian oil imports. 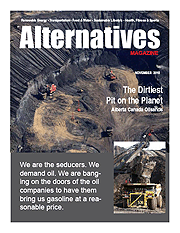