How many of us have ever thought about iodine for optimal health? 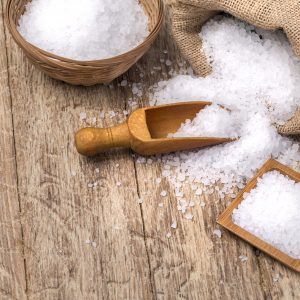 I'm guessing not many. A friend of mine who is recovering from Leukemia and now a thyroid condition has spent much of his rehab time researching his condition. He learned about the remarkable benefits of iodine and encouraged me to do the same and feature it here, in the magazine.

I found out its amazing stuff.

"Iodine affects the most basic functions of the body. It's found in every single one of our body’s hundred trillion cells. Without adequate iodine levels, life is impossible. Iodine is the universal health nutrient and brings health on many levels." Gabriel Cousens, MD. Iodine – The Universal & Holistic Super Mineral

Iodine is an essential mineral commonly found in seafood. Your thyroid gland uses it to make thyroid hormones, which help control growth, repair damaged cells and support a healthy metabolism. Unfortunately, up to a third of people worldwide are at risk of an iodine deficiency.

Iodine, while not as abundant as we’d like it to be, has some properties which make it incredibly useful to the body. It binds well to organic compounds as a result of its higher atomic number, and it is necessary to the synthesis of thyroid hormones. According to the American Thyroid Association, “Iodine is an element that is needed for the production of thyroid hormone. The body does not make iodine, so it is an essential part of your diet.”

How much iodine do we need daily? The Institute of Medicine has set the Recommended Dietary Allowance (RDA) for iodine in adult men and women at 150 μg per day. Individuals who add table salt to their food regularly should use iodized salt. One teaspoon of iodized salt contains approximately 400 μg iodine. As noted, since the introduction of iodized salt, iodine deficiency has been virtually eliminated in numerous parts of the industrialized world. Many areas still suffer from iodine deficiencies on a massive scale, however.

With all this talk about iodine, thyroids, and the like, what are we trying to accomplish? How does iodine benefit the body? What are the benefits of iodine that really matter to the body? Most who even have a cursory knowledge of iodine understand that iodine helps convert thyroid-stimulating hormone (TSH) to T3 and T4 (triiodothyronine and thyroxine), aiding and supporting proper thyroid function. But what else can we expect from iodine?

It doesn’t take a clinician to notice what iodine can mean energy-wise for those who take it as a supplement. Iodine is well-known as an energizer. Why is this so? Iodine is very effective in breaking down both carbohydrates and fats in the system. It accomplishes this by helping the body’s metabolism maintain consistency. By supporting stable metabolic activity, your body is more efficient at processing and utilizing the minerals and nutrients in your diet while forestalling fat absorption. When your energy levels are up, your body is better-suited to activity and better able to be active. You’re able to combat the lethargy that results from slower metabolism.

As noted, iodine has an atomic number of 53. This higher number allows it to bind to toxins very well. This ability extends to bacteria as well. It is useful in pulling some heavy metals, such as mercury and lead, out of the body in addition to its antibacterial abilities. Of note is iodine’s ability to support the body in eradicating the bacteria which causes peptic ulcers and other gastrointestinal issues.

As a support to the proper function of the thyroid, iodine has been linked in studies to support for prevention of thyroid cancer.

Per the Mayo Clinic:

“Thyroid cancer occurs when cells in your thyroid undergo genetic changes (mutations). The mutations allow the cells to grow and multiply rapidly. The cells also lose the ability to die, as normal cells would. The accumulating abnormal thyroid cells form a tumor. The abnormal cells can invade nearby tissue and can spread throughout the body.”  Since iodine facilitates normal cell lifecycle function, including apoptosis, it can support normal die-off of cells in the thyroid and promote healthy function therein.

A case in point is what happened in Poland:

“After the 1986 Chornobyl (formerly called “Chernobyl”) nuclear accident, shifting winds blew a radioactive cloud over Europe. As many as 3,000 people exposed to that radiation developed thyroid cancer over the next ten years. Most victims had been babies or young children living in Ukraine, Belarus, or Russia at the time of the accident. The region of excess risk extended up to a 200-mile radius from Chornobyl. Poland, immediately adjacent to Belarus and Ukraine, distributed KI to more than 95% of their children within three days of the accident and does not appear to have had an increase in thyroid cancer.”

While the benefits of iodine are numerous, an iodine deficiency can prevent most, and in some cases all, of these functions from occurring in our bodies. Knowing the symptoms of low iodine can make the difference between feeling fatigued, cold, sore, and struggling with sudden weight gain and thriving. Asking the right questions, like “How do I make sure I’m getting enough iodine?” and “Is it possible to get too much?” is the key to fully understanding this vital mineral.

Iodine deficiency was a problem for many years (prior to the 1920s) in various areas of the world. In the United States, the Great Lakes, Appalachian regions and the Northwest dealt with this issue along with most of Canada. Treatment of iodine deficiency by the introduction of iodized salt has virtually eliminated iodine deficiency and the so-called “goiter belt” in these areas. However, still today many other parts of the world do not have enough iodine available through their diet, and iodine deficiency continues to be an important public health problem globally. Approximately 40% of the world’s population remains at risk for iodine deficiency.”

The following are several symptoms that may be related to low iodine levels:


While most associate iodine loss with sweat, some can be excreted in the urine, too. Additionally, since the thyroid gland stores iodine in it, iodine deficiencies can lead to enlargement of the thyroid and hypothyroidism. Furthermore, mothers who received inadequate amounts of iodine can be at risk of giving birth to children with intellectual disabilities.

How Do I Get Iodine?

In addition to supplements, many foods offer good amounts of iodine. The great news is that many of these are likely already a part of your diet.

While many traditional foods–including those you might find at the holiday table, like roasted turkey, cranberry sauce, and baked potatoes—offer good amounts of iodine, several sea-based sources offer prime amounts. Look for seaweeds like kombu, which is often used as stock bases in soups and stew, or nori, which can be sprinkled on salads or used in wraps or sushi. Always opt for organic seaweed; conventional seaweed often contains disruptive heavy metals. However, seaweed isn’t the only food with iodine. Here’s a non-exhaustive list of twenty-one foods with high amounts of iodine:


Knowing how much iodine to take depends on an individual’s age, activity level, and even climate. The average human body contains 15-20 mg, most of which are found within the thyroid gland. Adults require roughly 150 mcg of iodine daily, while women who are pregnant or lactating need nearly double the amounts.

Can I Be Taking Too Much Iodine?

While proper amounts of iodine are good, high doses can be dangerous. Those with thyroid problems, hyperthyroidism, and autoimmune diseases can regress with too-high doses. Furthermore, coupled with iodine through seaweed, certain medications, and even radiology procedures can put people at an even higher risk.

Iodine can be stripped through exposure to halogens like fluoride, chlorine, and bromine. Additionally, certain vegetables in the cabbage family, including brussel sprouts, cauliflower, broccoli, radishes, turnips, kale, and watercress can block iodine absorption. For this reason, be mindful of how often you are consuming them. One way to better absorb iodine from the foods you consume is to cook them properly—I don’t mean, learn to cook better but to understand the effect that various cooking methods can have on your iodine absorption. A study published in 2013 in the Journal of Food Science and Technology determined that to avoid iodine loss, add salt after cooking is complete. Furthermore, storing iodized salt in humid or hot conditions can degrade the iodine; for this reason, it’s recommended to keep your salt in a pantry and away from heat exposure.

Eating high-sodium foods at restaurants, in particular, is not a good way to increase your iodine. Few restaurants use iodized salt, meaning that salt consumption can go up without receiving any of the benefits of iodine. As Harvard Medical School explains, “To get all your iodine from salt, you would need more than half a teaspoon of iodized salt a day. That's two-thirds of the daily allotment of sodium (1,500 milligrams) recommended by the American Heart Association.” In other words, opt for iodine-rich food sources.

Where you live and the quality of your soil, can play a significant role in how much iodine you receive in your diet. More than 100 countries globally add iodine to salt to help citizens get enough. For this reason, use iodized salt to season your food once cooked and be sure to emphasize iodine-rich foods, like seaweed. Lastly, iodine supplements may be worth looking into for those who struggle to get enough iodine in their daily diets.